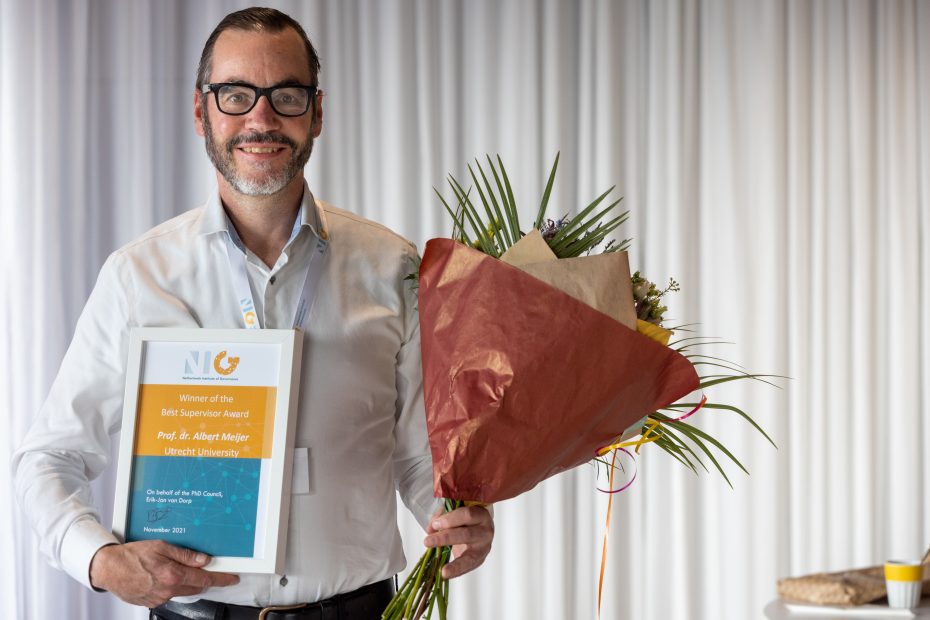 During the 2021 conference, per tradition, the NIG best supervisor of the year award was handed out by the head of our PhD-Council (Erik-Jan van Dorp). Below you read his full speech.

It is my honour to present to you, the best supervisor of the year Award for 2021.

Last year, we said that the ‘best supervisor of the year’ is not a competition, but a celebration. And we celebrated Caelesta Braun and Bert Fraussen. We, as the NIG’s PhD Council, believe there’s plenty of competition and comparison in academia, our discipline, maybe even in this room, as it is. So, today, if you allow me, we do not elect a winner – someone who has done a better job than others. Instead, we celebrate a great supervisor – and through that person we celebrate all great supervisors and supervision practices. Me standing here is an imperfect, but sincere way of collectively saying ‘thank you’ for the work, time and effort that you supervisors, have put into us, PhDs.

For that is the key lesson we learned from collecting nominations and handing out this award for over a decade now. PhDs appreciate their supervisors. Yes, we know, there’s difficulty, there is conflict, there are role expectations and stress abounds.

Be that as it may, the PhD council takes heart in the nominations that we receive every year. They highlight effort on your behalf, hospitality towards PhDs with small houses or few friends in this country while the world remained in lockdown. They tell of the insights and ideas that you bring, meeting upon meeting. They tell of you being well-read, and maintain a proper memory, they laud your practical wisdom when it comes to doing research in the real world. They illustrate the value of the little things; of personal conversations, a walk here, a coffee there. Quite possibly, many – if not all – PhDs would be utterly lost without you.

Now, I know this is lunch – so I will be brief – and this is also a celebration. But some of these nominations were awkwardly ‘’honest’’. Apparently, after a few years of working together, some supervisor-supervisee tandems become brutally candid. I cannot spill the beans, but one nomination plainly stated the supervisor as a difficult person. Others feared the red pen of their supervisor’s scrutiny – resembling scorched earth tactics, rather than the equivalent of ‘very nice, I just have a few comments’… Rest assured, we know there is no such thing as perfection – and we do not need it.

This year, we had more nominations than ever before. To us, this was a reminder of a year that was challenging for all sorts of reasons – not just for PhDs. We have been working during a pandemic that takes longer than most could fathom – while life with all its good and bad went on.

Very briefly, what do PhDs appreciate? Three things stand out from this year’s nominations. First, plain expertise. We like it, as we get to the bottom of things, you stay on top of things. If you know the history, as well as the latest studies. Second, as supervisors increasingly work in teams, we love to see teams work. Preferably not Microsoft Teams though. Third is tailor made attention. Some supervisors master the craft of treating each PhD unequally in the best possible way.

Some received wonderful nominations. I hope their PhDs are willing to share their nominations and talk about them. I want to mention three we did not choose, but we celebrate them anyhow. They include Sandra van Thiel, overall great supervisor. NIG’s very own Noortje de Boer, for being very relatable. The duo of Taco Brandsen and Marlies Honigh, for their superb teamwork.

But, unfortunately, this format allows me to spotlight just one supervisor. It is someone who is present among us – please have a look around. Someone who received multiple – genuinely sincere – nominations from different places. Someone who tailors their style to the candidate in front of them. Someone who – to their supervisees – ticks all the boxes of classic supervisors: grounded in competence, making their network accessible, open to feedback, willing to adapt, and rigorous in reading PhD’s papers. It is someone who is able to sit still and listen. Someone who asks to drop by for coffee if they happen to be in the neighborhood. On top of that, this supervisor goes the extra mile to host informal sessions with top and niche scholars, in order to take the input to their PhDs to the next level.

The NIG supervisor of 2021, an unrelenting source of inspiration, a personal colleague, a kind heart, and someone we all cherish,

Please, put your hands together for, 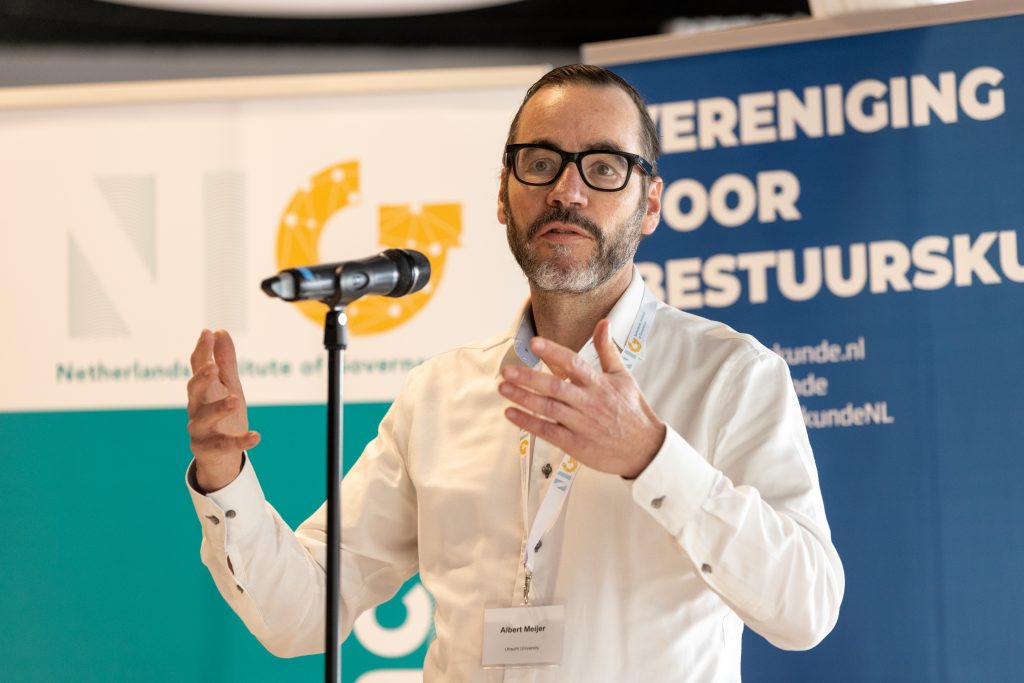 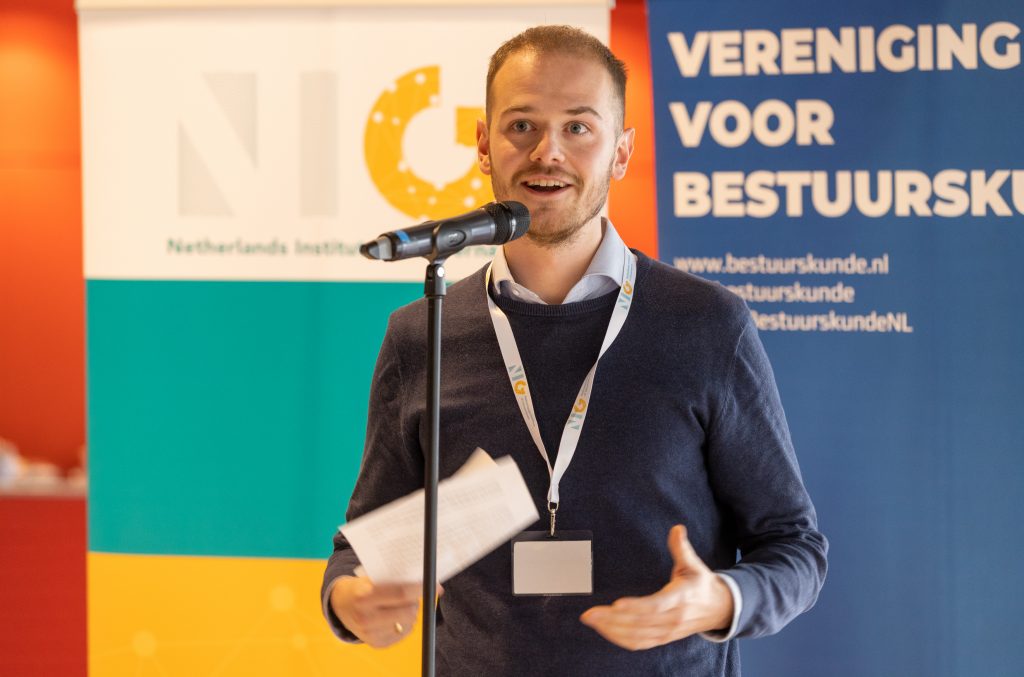